It is 1955. It is the Jim Crow South. Buses have different sections for white and colored people. One woman in Montgomery, Alabama has had enough of it. This brave African-American woman decides to take a stand and hence decides to just sit. She does not give up her seat when asked to by the driver because as per the law when there is no other seat to move to, you don’t have to give up your seat as long as it is not for an emergency or for a disabled person. And this was certainly not anyone of those. This was just pure racial discrimination and segregation at its worst. The police get called and they eventually arrest her and takes her away to Jail forcibly. This would spark one of the most important social movement in U.S. history.

Ah, Rosa Parks? Well, no! This is Claudette Colvin who pulled off this brave act almost nine months before Rosa Parks. While she was just fifteen. She was the first one to do. Hers is the one that triggered a few others to take the stand. And eventually Rosa Parks. She was one of the five Plaintiffs that would sue the City for segregation (Parks was not in the five) in the famous Browder vs Gayle case. A young pastor in the city, Dr. Martin Luther King would get involved in this and later go on to lead the movement. That part of the story we know. But it all started with young Claudette.

This book is the story of Claudette Colvin, one of the almost forgotten true heroes of the Civil Rights Movemement. Thanks to Phillip Hoose (Wikipedia) who would go through the archives and research and bring this story out. The book won the National Book Award for Young Adult Literature, a Newbery Honor award and many other well-deserved ones. 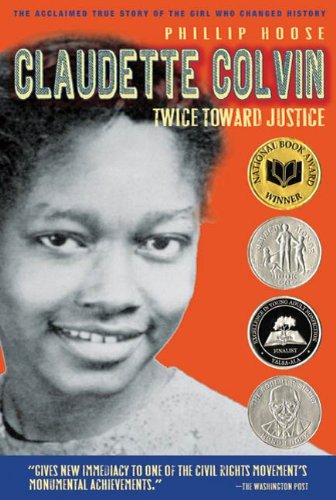 It is a heart wrenching start right in the first paragraph. Claudette describes how she got to know about Race. When she was four years old, she is in a shop when a group little boys get curious and one of them takes her hand and compares his hand to hers. Claudette’s mom hurries toward her and gives her a backhand slap across the face and tells her, “Don’t you know you are not supposed to touch them?”. The white boy’s mother who was watching this nods approvingly. Claudette’s mom grabs her hand and rushes her away from the store.

About the bus riding experience.

Brown vs. Board of Education

This is a short snippet about the landmark Brown vs Board of Education case.

On her school days.

On her idol Harriet Tubman.

Mary Louise Smith, the teenager who would follow Claudette.

On being left out.

During the bus boycott which would go on for well over a year, the majority of the people who still had to commute had a very tough time. They would come up with their own carpool system (even though there weren’t as many cars nor as many African Americans who had cars). A small incident where a volunteer sees an old woman walking and offers her a lift.

This was one of the ways that started it. “Separate but Equal”.

The Ruling and aftermath.

Claudette’s life after the events.

A few important links from the Bibiliography

Fine set of educational materials on Browder v. Gayle and the plaintiffs, including Claudette.

This is a very important book. Please do read this and more importantly get this for the children and the young adults you know and care about.