Walden on Wheels by Ken Ilgunas is a good fun read about one student’s realization of how expensive education is and colleges are (thank goodness he realizes the burden of debt and indebtedness way earlier). It is about how he overcomes the debt and finally when wanting to pursue a Masters degree, he avows to himself that he will do it without any more loans and as a homage to his idol, Henry David Thoreau, decides that he will live out of a van thereby saving on rent and such expenses.

The book starts off with a very nice bumper sticker slogan and a profound statement on van dwelling. 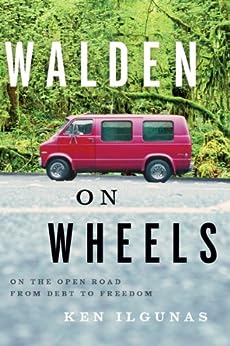 Ken starts off at a Private College which ends up costing about $32,000+ a year. He realizes that this is too much. He is not even able to get good internships and works as a cart pusher in Home Depot.

He looks at the stats for those with an English / History major and it hits him hard. He immediately transfers to a public school near home and moves in back with his parents.

Here is the stunning statistic.

He has lot of difficulty in finding any good summer jobs. All along he has always wanted to travel to Alaska (cue Chris McCandless Into the Wild by Jon Krakauer is a very good read). So he takes up a job at a remote city in Alaska as an inn-keeper.

A profound piece amidst this narration.

He refers to himself as one of the cheechakos.

Over the many years, he has all types of jobs: tour guide, night cook, maintenance worker, voyageur, corpsmember, ranger, package handler. I loved the way how he switches between what he is actually doing (his job or school), his thought process justifying his ascetic life as well as contemplating what’s happening around him and about Alaska and the travels.

During one season, he becomes a Ranger at one of the big National Forest there and has a few close shaves.

He himself has been a gamer all along and now that he is a forest ranger that too in Alaska he realizes thus.

There are times when he is having to take up a menial job.

Honestly, I didn’t realize there was going to be as much about Alaska in this book. Oh Alaska, Oh Aurora Borealis, I will come for you one of these days.

Finally after finishing his Bcahelros degree with zero debt and a year as a ranger to save up some money for his future studies.

He gets accepted in to Duke’s Liberal Arts Masters Program.

And he goes on to bemoan the current education system as well as the capitalist (I think he means the consumerism part) model.

On Discomfort and Modest Living

While he works as a Ranger, he mentions this Inuit word “Koviashuvik”.

Finally he graduates out of his program, once again debt free.

A fun read. His English degree and Liberal Arts major definitely came in handy while writing this book. The Van living part starts only at 60% of the way through.