Mahatma Gandhi’s Life in his Own Words

I chanced upon this little booklet that is a compilation of Mahatma Gandhi’s own writings. His autobiography is the main one, “The Story of My Experiments with Truth”, originally written in Gujarati as “Sathiya Sodhani”. I finally decided to buckle down and read at least some of his own words rather than interpretations across articles, history chapters and movies (movie in singular maybe? the main one that won a gazillion oscars?). It is one thing to learn through secondary sources but it is totally a different experience to read his own words. 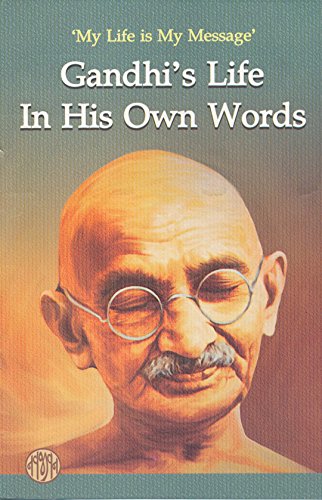 Here is the link: Gandhi’s Life in his Own Words. This is a compilation by Krishna Kripalani. I thought it would be worthwhile to compile the links and books since there is a voluminous amount of material available online and in various formats and for free. More links at the end of this post.

What follows after that is a few of quotes and passages that moved me.

He got married at the age of 13. And he doesn’t think that is an appropriate age for marriage.

And on the rights for Women.

Very nice words on joining (or believing in) a new cult. In this case, Vegetarianism.

The landmark incident in Pretoria, South Africa where he was thrown out of a first class compartment because he was colored and a white man wanted the seat.

On Poetry and Poets.

Another one of the sayings that after I read it, it seems much more obvious.

On Teachers and Teaching

How he thinks of his service.

On teaching Children and raising them. These were very profound true sayings for his days - only in recent decades have actual Science and Psychological studies have taken this on as a subject worth studying and finding various theories.

On Fasting and Dieting

Mahatma was ahead of his times.

On Renouncing Things and Material Possessions

On Jesus and Christianity

On Gandhism and people praising him

I am certain the same can be said of Mahatma’s teachings as well.

Pondering about his own death

This seems to be the Main Site.

The link to the above book

Here is a list of all of his works and various compilations - a treasure trove. Available to read online or download as PDF or EPUB. Thanks to the good folks who did this work. Printed editions of his entire works are available too.

Some Wikipedia links for completeness : Mahatma Gandhi, Gandhism and his Autobiography.

I am planning to read the full autobiography next and also his writings on Bhagavad Gita. This is also part of the “Meaning of Life” series. To be continued.